Source:
Rice University
Summary:
Low concentrations of serum albumin proteins have the ability to bind one-to-one to gold nanoparticles and, upon unfolding, prompt them to aggregate, according to scientists. The finding may be important to those who study diseases caused by protein aggregation or nanoparticle toxicity
Blood serum proteins have been observed combining one-to-one with gold nanoparticles and prompting them to aggregate, scientists at Rice University reported.
This is unexpected, according to Rice researchers Stephan Link and Christy Landes, who have led studies of the proteins most responsible for keeping solids in blood separated. In low concentrations, they said, the proteins irreversibly attach, unfold and then bring nanoparticles together.
This is counter to the purpose of albumin proteins, the most abundant in the blood stream, they said.
The paper, published this month in the American Chemical Society journal ACS Nano, has implications for diseases caused by aggregation, like Alzheimer's, and for nanoparticle toxicity issues, the researchers said. Gold nanoparticles are increasingly being used as therapeutic agents.
Several years ago the Rice team found that higher concentrations of bovine serum albumin (BSA), a near-match for its human counterpart, could keep naturally hydrophobic gold nanoparticles from clumping. In new experiments, some using technology that has only become available in recent years, BSA proteins in low concentrations were observed to unfold in the presence of gold nanoparticles.
"We think the protein is attaching first and unfolding, and that prevents other proteins from coming in," Link said. "But it also facilitates the aggregation."
"This is the most common protein in blood serum," Landes said. "Its job is to surround and make a nice hard shell around anything in solution that would otherwise be insoluble and stabilize the complicated mixture of cells, proteins and hormones in blood.
"What's important is the protein's ability to successfully coat otherwise hydrophobic steroid hormones, nanoparticles, viruses, anything," she said. "But in order for it to make that coating, it needs to stay nicely folded."
By unfolding in the presence of gold nanoparticles, they said, the protein does two things: It spreads out on the particle, leaving no room for other proteins to attach, and exposes its usually hidden hydrophobic core, which encourages aggregation with other protein-nanoparticle sets.
"This is an issue whether people use nanoparticles for therapeutic purposes or just come into contact with nanoparticles in products or the environment," Landes said. "If serum albumin can do its job, everything's fine. But we can't help but notice that protein unfolding, protein aggregation and fibril formation are at the root of all sorts of diseases."
While their previous research showed albumin proteins in high concentrations keep nanoparticles soluble, "there are biological situations where the concentration of serum albumin protein could be low enough to cause problems," Landes said.
They also noted that two other blood-borne proteins, fibrinogen and globulin, cause gold nanoparticles to aggregate regardless of their concentrations. "They unfold no matter what the concentration, meaning that the BSA or human serum albumin are really designed to make this coating and keep everything from running out of control," Link said.
"We're saying people really need to pay attention to the ratio between the protein -- in this case, BSA -- and nanoparticles, because different things can happen."
Story Source:
Materials provided by Rice University. Note: Content may be edited for style and length.

M-CSF May Act As Powerful Prognostic Factor For Multiple Myeloma

A recent study published in the journal Medical Oncology determined that the cytokine M-CSF is highly predictive of survival in multiple myeloma patients. In the study, researchers evaluated a diverse set of cytokines to determine their usefulness as prognostic factors in multiple myeloma.

Cytokines are proteins secreted by immune cells to generate an immune response. They are involved with allergic responses, inflammation, blood cell development, and the development of multiple myeloma and other types of cancer.

The study published in Medical Oncology evaluated the relationship between the blood serum levels of various cytokines in 64 untreated myeloma patients and the patients’ survival rates. Patients were followed up over a period of over seven years. The serum beta-2 microglobulin level was increased in 40 percent of patients, whereas the serum albumin level was low in 45 percent of patients.

Most significantly, M-CSF more accurately predicted disease severity and progression than beta-2 microglobulin, which is the established prognostic factor for myeloma.

The authors of the study concluded that M-CSF is a powerful prognostic factor for multiple myeloma and should be considered in novel therapeutic treatments.

Albumin: Not Just a Plasma Expander

Abstract:
HUMAN SERUM ALBUMIN is important for health and normal metabolic function. It comprises over half of the extracellular protein in blood and is the main regulator of plasma oncotic pressure. Traditionally, its main use has been as a volume expansion agent. Albumin undertakes a wide variety of transport functions and is essential for carrying metabolic products to the liver for metabolism and excretion. Due to its redox-active properties, it also acts as a first line of defence against pro-oxidant and free radical injury. In subjects with liver disease its concentration is reduced, an effect that is further compounded by studies that demonstrate that the remaining protein is functionally impaired. This lack of metabolic function most likely contributes to exacerbation of the disease processes. Administration of albumin to both patients with liver disease, and for a wide variety of other indications, shows beneficial effects that go far beyond simple fluid resuscitation.

METHODS: A total of 146 patients with gastric cancer underwent radical resection from January 2001 to December 2003. Clinicopathological data were analyzed retrospectively. Patients were divided into two groups, including patients with a normal preoperative serum albumin level(>35 g/L, n=115) and patients with hypoalbuminemia (≤35 g/L, n=31).

CONCLUSION: Hypoalbuminemia is associated with worse survival in patients with cancer in the lower stomach and adjuvant therapy should be considered.

Abstract
Human serum albumin (HSA) is responsible for 80% of the colloid osmotic pressure of plasma (25-33 mmHg). Its main clinical use is in maintaining colloid oncotic pressure and increasing circulating plasma volume with the typical dosage in excess of 10 g per dose.

HSA is isolated by fractionating human plasma, which entails possible contamination by viruses or prions. Recombinant HSA (rHSA) has been successfully produced using a methylotrophic yeast, Pichia pastoris. Due to the fact that the clinical usage of HSA infusion often exceeds 10 g, rHSA preparation requires a high level of purity. rHSA purified by means of Streamline technology is identical to plasma-derived HSA (pdHSA) with no detectable mannan component from P. pastoris.

The structural and functional properties of rHSA are similar to those of pdHSA. Preclinical and clinical trials have confirmed the safety and efficacy of using this rHSA preparation in different disease conditions, such as hemorrhagic shock, cirrhosis with ascites, and other critical clinical conditions related to plasma volume and oncotic pressure. In addition to its use as a plasma expander, rHSA has great potential as a biomaterial for other medical and pharmaceutically related applications

Abstract
Bovine serum albumin (BSA) is a commonly used model protein in the development of pharmaceutical formulations. In order to assay its release from various dosage forms, either the bicinchoninic acid (BCA) assay or a more specific size-exclusion high performance liquid chromatography (SE-HPLC) method are commonly employed. However, these can give erroneous results in the presence of some commonly used pharmaceutical excipients. We therefore investigated the ability of these methods to accurately determine BSA concentrations in pharmaceutical formulations that also contained various polymers and compared them with a new reverse-phase (RP)-HPLC technique.

We found that the RP-HPLC technique was the most suitable method. It gave a linear response in the range of 0.5–100 μg/ml with a correlation co-efficient of 0.9999, a limit of detection of 0.11 μg/ml and quantification of 0.33 μg/ml. The performed ‘t’-test for the estimated and theoretical concentrations indicated no significant difference between them providing the accuracy. Low % relative standard deviation values (0.8–1.39%) indicate the precision of the method. Furthermore, the method was used to quantify in vitro BSA release from polymeric freeze-dried formulations.

ABSTRACT
Purpose: To investigate the redox state of human serum albumin concerning cysteine-34 as a possible systemic redox marker in patients with different eye diseases with and without complications and with consideration of possible effects of age.

Results: Albumin as a systemic marker for oxidative stress was shifted to a more oxidized state by DM. An even stronger shift to the oxidized form was observed in patients with proliferative diabetic retinopathy. Notably, these effects were independent from age. In contrast, CAT and AMD had no influence on serum albumin redox state.

Conclusion: Serum albumin is not shifted to more oxidized forms by localized oxidative stress, but it is in systemic diseases like DM. 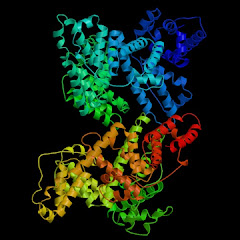 MedTerms Word of the Day